When fires burn in the forest, they burn in a mosaic of low, moderate and high intensity creating a tapestry of heterogeneity which restores and improves the forest ecosystem and promotes and enriches the native biodiversity of these areas. Although it may seem counterintuitive, when older forests burn at the highest intensity some of the best wildlife habitat in the forest is created.

Want to learn more about the emerging science regarding forests and fire? 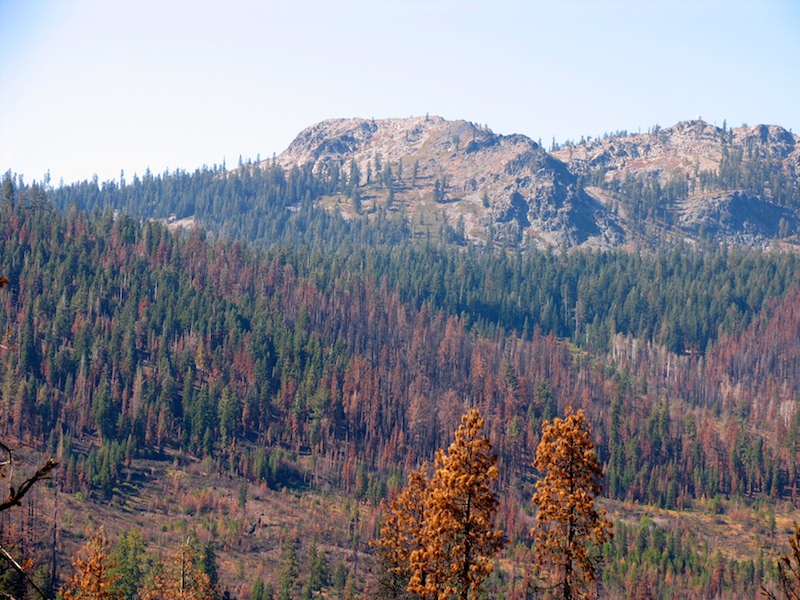 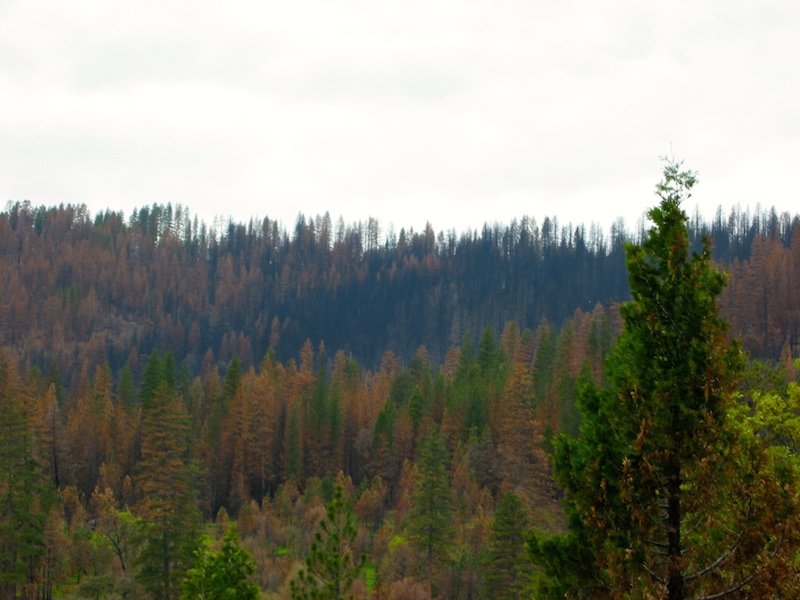 Please scroll to the bottom of this page to see the post-fire logging projects we are monitoring.

Forests of the west, including the Sierra Nevada forests, naturally have a mixed-intensity fire regime and each intensity level of fire is important in restoring a healthy forest ecosystem. 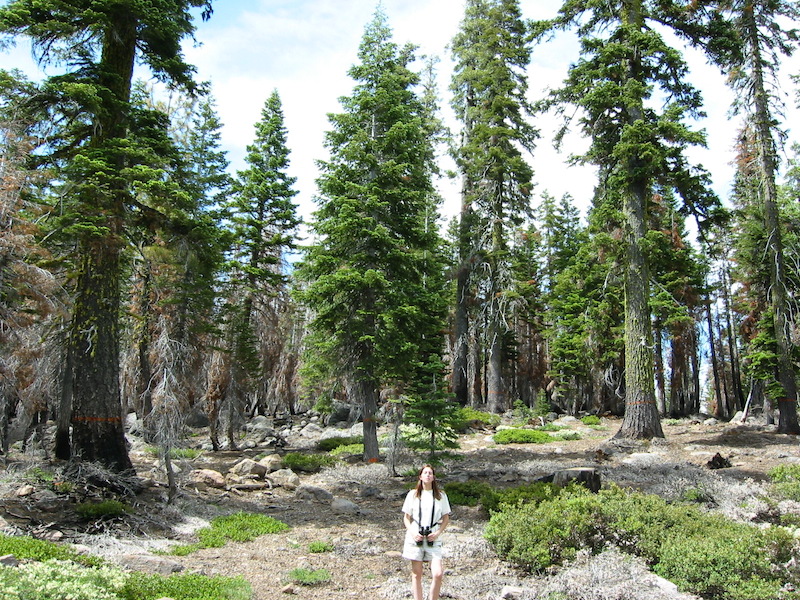 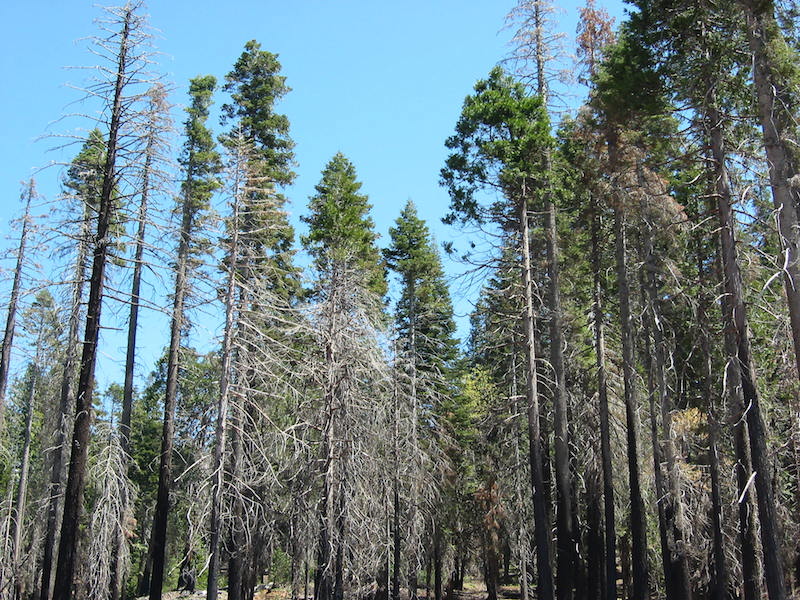 Moderate intensity fire consumes more duff and understory vegetation and creates more medium and large snags (dead trees) to restore this important wildlife component to our forests. Medium and large snags in green/unburned forest are extremely rare (currently less than 2 medium/large snag per acre in the Sierra Nevada), and well below what is necessary to sustain healthy populations of native wildlife. When such areas experience moderate intensity fire they are restored to conditions which are optimal for species survival and population growth, so long as they are not logged. 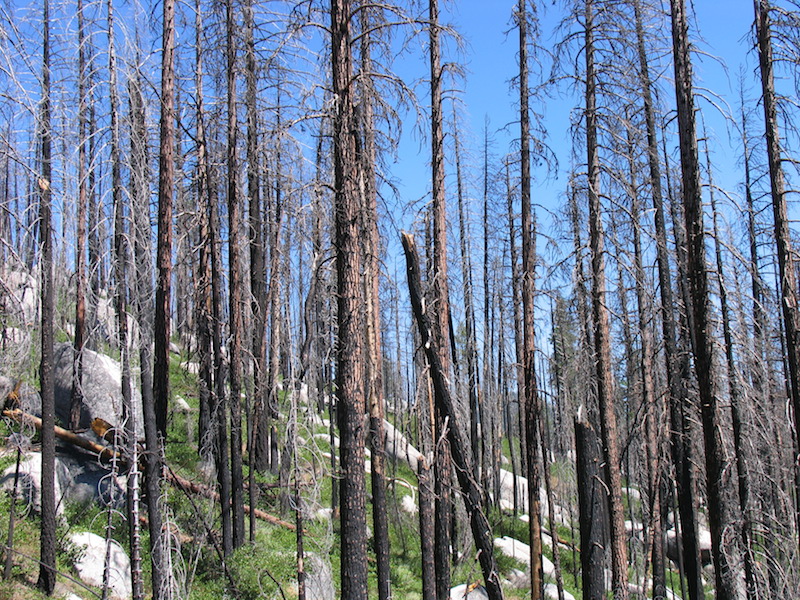 Areas which burn at high intensity, where most or all of the trees are killed, have proven to be the areas which experience the largest transformation not only in terms of vegetation, but in terms of the surge of life which follows the fire. When high intensity fire kills most or all of the trees in a mature or old forest stand it creates what is known as complex early seral forest. These areas become some of the richest habitat types on the landscape, supporting as much if not more biodiversity as green old forest.

Complex early seral forest” (CESF), also known as “snag forest habitat”, is created by patches of high-intensity fire (where most or all trees are killed) in mature conifer forest. It is comprised of an abundance of medium and large standing fire-killed trees (“snags”), downed logs, patches of native flowering shrubs (“montane chaparral”), and areas of natural conifer and oak regeneration. Many rare and imperiled native wildlife species have evolved to depend upon CESF, such as the Black-Backed Woodpecker with a multitude of other species depending upon and utilizing this habitat as well. Fire in old mature and old growth stands does not signal the end of these areas, but rather the beginning, a time of great abundance and rebirth.

Forest rejuvenation begins in the first spring after a forest fire. Native wood-boring beetles rapidly colonize, detecting the fires from dozens of miles away through infrared receptors these species have evolved in a long relationship with fire. The beetle larvae bore under the bark of standing snags, and develop there. Woodpecker species, such as the rare and imperiled Black-backed Woodpecker, drill into snags and feed upon beetle larvae; they also excavate at least one new nest cavity each year in CESF. This creates homes for numerous secondary cavity-nesting species, like the Mountain Bluebird (and, occasionally, squirrels and even martens), that cannot create their own homes. The native flowering shrubs that germinate after fire attract many species of flying insects, which provide food for flycatchers and bats; and the shrubs, new conifer growth, and downed logs provide excellent habitat for small mammals. This, in turn, attracts raptors, like the California Spotted Owl, which nests and roosts mainly in the low/moderate-intensity fire areas, or nearby unburned forest, but actively forages in the CESF patches—a sort of “bedroom and kitchen” effect. Deer thrive on the new growth, black bears forage on abundant berries, and rare carnivores like the Pacific Fisher actively hunt for small mammals in this post-fire habitat. 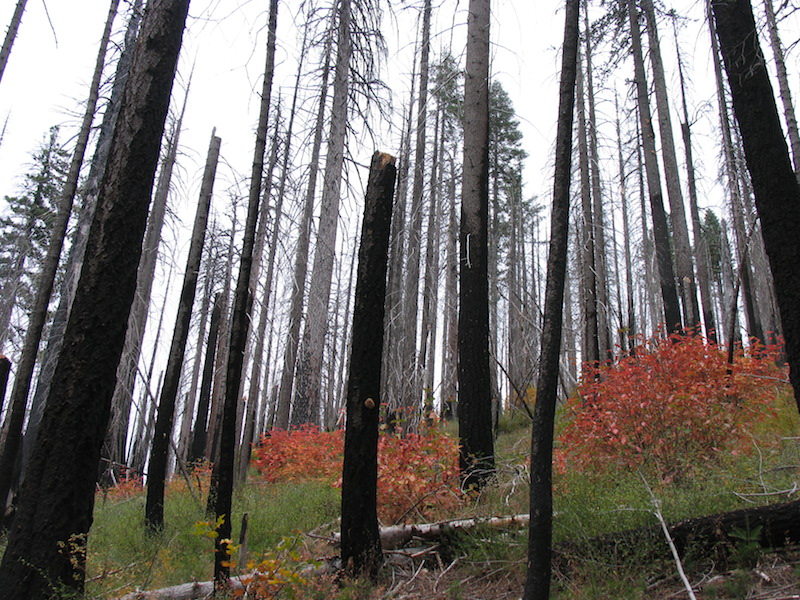 Unlogged/unmanaged snag forest habitat 5 years after the Storrie Fire on Lassen National Forest, with an abundance of snags (standing fire-killed trees), natural conifer regeneration, oaks and dogwoods, and native shrubs. JMP has protected tens of thousands of acres of CESF from post-fire logging on National Forests since 2000.

Due primarily to policies of not letting fires burn (fire suppression) and cutting down forests that have experienced fire (post-fire logging), we now have a severe deficit of CESF habitat on the landscape, relative to the natural, historical amounts.

This post-fire habitat, known as “complex early seral forest,” is quite simply some of the best wildlife habitat in forests and is an essential stage of natural forest processes. Moreover, it is the least protected of all forest habitat types and is often as rare, or rarer, than old-growth forest, due to damaging forest practices encouraged by post-fire logging policies.

It is clear from our first year of monitoring three burned areas that post-fire habitat, especially high severity areas, are an important component of the [forest] ecosystem…post-fire areas are not blank slates or catastrophic wastelands; they are a unique component of the ecosystem that supports a diverse and abundant avian community…

Overall species diversity, measured as the number of species—at least of higher plants and vertebrates—is often highest following a natural stand-replacement disturbance…post-fire (salvage) logging does not contribute to ecological recovery; rather, it negatively affects recovery processes…Currently, early-successional forests (naturally disturbed areas with a full array of legacies, i.e. not subject to post-fire logging) and forests experiencing natural regeneration (i.e. not seeded or replanted), are among the most scarce habitat conditions in many regions.

The ecological cost of salvage logging speaks for itself, and the message is powerful. I am hard pressed to find any other example in wildlife biology where the effect of a particular land-use activity is as close to 100% negative as the typical postfire salvage logging operation tends to be. 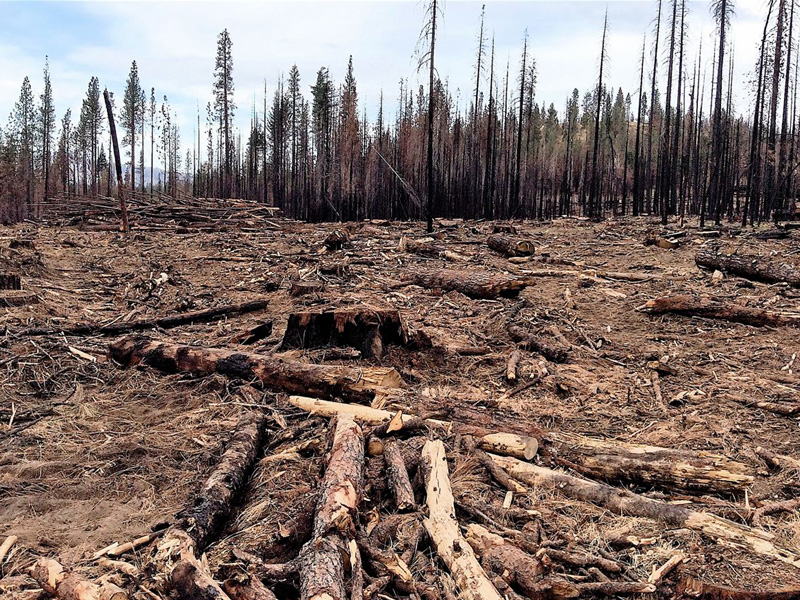 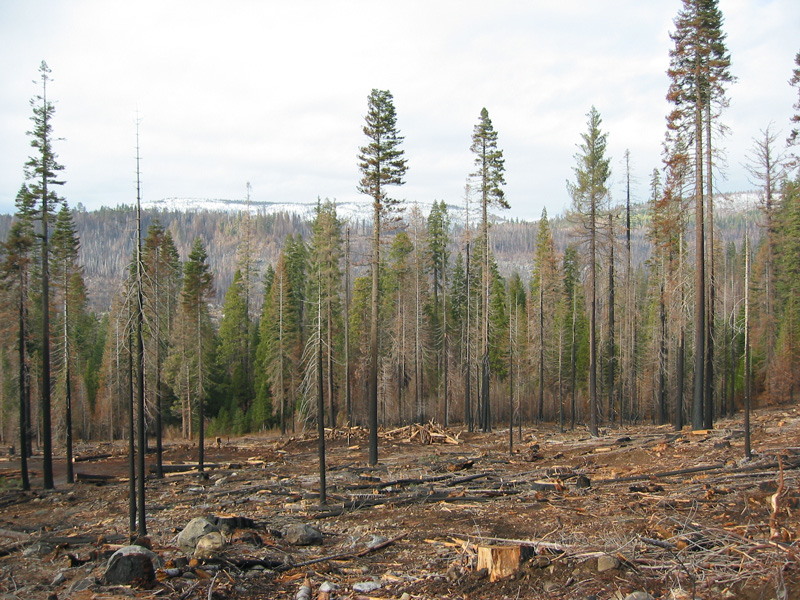 Which Forest Type is Most Rare in the Sierra Nevada?

Which Bird Species are Declining in the Sierra Nevada?

Which Bird Species are Increasing in the Sierra Nevada?

Here are some of the species we have observed thriving in complex early seral forests:

Post-Fire Logging Projects We Are Watching