In 2010, the John Muir Project (JMP) and the Center for Biological Diversity (CBD) wrote and filed a Petition to list the Black-backed Woodpecker under the California Endangered Species Act (CESA) in order to protect this rare bird from further habitat loss due to post-fire logging which takes place immediately after a fire burns on private or state lands. In 2014, against the advice of their own lawyer, the Commission improperly rejected the Petition. We filed suit with the Center for Biological Diversity to challenge their determination. 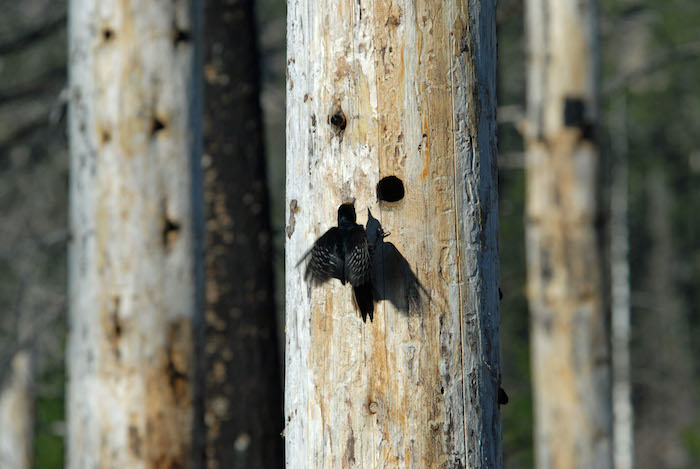 The Black-backed Woodpecker depends upon stands of mature forest that have experienced high-intensity fire; thus this species is severely harmed by post-fire logging which removes their habitat.

Each pair of Black-backed Woodpeckers needs approximately 200 acres of this habitat, typically with at least 100 standing fire-killed trees per acre, on average, in order to have enough of their prey–native wood-boring beetle larvae which live under the bark of fire-killed trees–to survive. Once relatively common in the Sierra Nevada, before fire suppression and post-fire logging, this species is now extremely rare (it is estimated that as few as 600 pairs remain in the State), and there are no meaningful protections for its habitat on either public or private lands.

The California Fish and Game Commission, in 2011, determined that there was sufficient reason for concern, and designated this species as a Candidate under CESA. Under pressure from the timber industry and U.S. Forest Service, however, the California Fish and Game Commission later ignored and misrepresented the science and rejected the Petition. JMP and CBD filed a lawsuit in 2014 against the Commission to challenge its decision under CESA.

Status Review of Black-Backed Woodpecker prepared by JMP and CBD

Commission Decision Denying to List the Black-Backed Woodpecker under CESA