In the West, we often have periods of drought.  With these periods of drought our native bark beetle populations have a tendency to increase.  This is a natural process, nature’s design for balancing our ecosystems in times of scarcity, which results in the least fit trees within our forests being killed.  Ecologists refer to this process as snag recruitment (i.e., the process of more dead trees being created in a stand of living trees), and it is essential to the health of the forest and the native wildlife that depends on them.  As the landscape responds to drought (see image below), people often get concerned and have questions about the new conditions, which is understandable.  Unfortunately some special interests use changing circumstances to push their agenda.  In the case of forests and drought, timber interests and managers at the US Forest Service have used the existence of dead trees, which have resulted from drought and native beetles, to push for more logging, claiming that dead trees increases fire probability and intensity.

Today we will address the Question:  Do forests with high numbers of standing dead trees (snags), burn more intensely than forests with few or no snags? 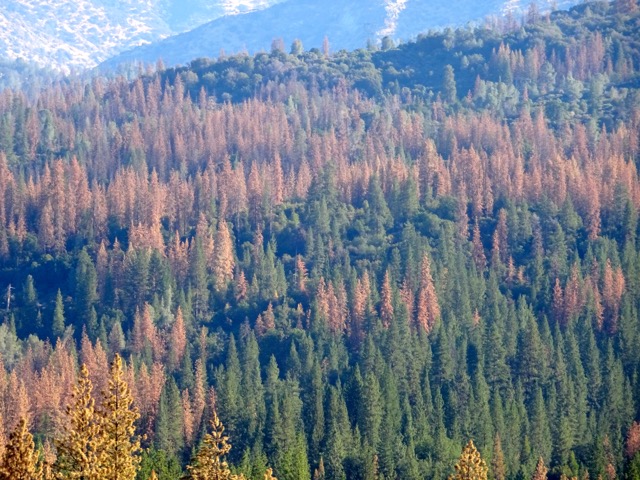 Short Answer:  The claim that dead trees increase fire probability, intensity or rate of spread has been strongly refuted by current science. In fact, forests with high levels of snags tend to burn less intensely, as explained below.

Shortly after trees die (the “red stage”, when reddish-brown dead needles are still on the trees, as seen in the above photo), the combustible oils that naturally occur in their needles begin to dissipate, reducing potential fire intensity slightly shortly after the trees die, as U.S. government and university ecologists recently found, using satellite imagery and working in conjunction with NASA (http://www.nasa.gov/topics/earth/features/beetles-fire_prt.htm).

Within a year or two, dead needles and twigs start to fall to the ground (the “gray stage”), and quickly begin to decay, reducing potential fire intensity even further since there is less kindling-like material in the forest canopy, making it harder for crown fire to occur.  This makes intuitive sense if you have ever made a campfire.  It takes kindling—very small diameter material like small branches, twigs, and pine needles—to start a campfire.  You cannot simply put a match to a large log and expect it to burn.  Within two or three years after trees have died, the resulting snags are much like large logs with no kindling.

Examples of Scientific Findings Regarding “Snags” and Fire.

Many scientists have investigated how fires burn in forests where the levels of snags were known prior to the occurrence of fire.  Hart et al. (2015), in the Proceedings of the National Academy of Sciences, analyzed fires across the entire western U.S. and found that fires do not spread faster in forests with high levels of both recent snags and older snags.

“In contrast to common assumptions of positive feedbacks, we find that insects generally reduce the severity of subsequent wildfires. Specific effects vary with insect type and timing, but both insects decrease the abundance of live vegetation susceptible to wildfire at multiple time lags. By dampening subsequent burn severity, native insects could buffer rather than exacerbate fire regime changes expected due to land use and climate change.”

As explained previously, groups of trees die periodically during cycles of drought and bark beetle activity.  These beetles are native species, and in many ways they form the cornerstone of the entire forest ecosystem. Beetle larvae provide essential food for woodpeckers. Woodpeckers excavate multiple nest cavities each year in snags, which are softer than live trees, and create homes for dozens of other cavity-dependent animals that need tree-cavities to survive but cannot make their own.  Dead trees mean life and homes for multiple forest species of birds and mammals and are essential for forest health and maintaining our native biodiversity.  Put simply, dead trees, naturally created by drought and beetles, are essential to the ecological health of our forests. Before this recent period of drought and beetles in California, the forests in the Sierra Nevada had only 1-2 large snags (dead trees) per acre of forest- well below the minimum levels necessary to support species as diverse as California Spotted Owls or Pacific Fishers.  This recent pulse of snag recruitment caused by drought and an increase in native bark beetle populations has been a benefit to our western forests, and is not something that should cause concern with regard to the ecological health of our forests or our forests natural fire regimes.

Legislation that eliminates environmental safeguards and prioritizes the removal of dead trees to ostensibly improve “forest health” or reduce fire risk is untethered to science and is inappropriate public policy for our treasured public lands. Recognizing the tremendously high ecological value of snags and snag forests, and prioritizing protection for snags and snag forests, is the scientifically supported direction for policy makers and land and wildlife managers.  Dead trees in the forest should not be feared, they should be revered and celebrated!