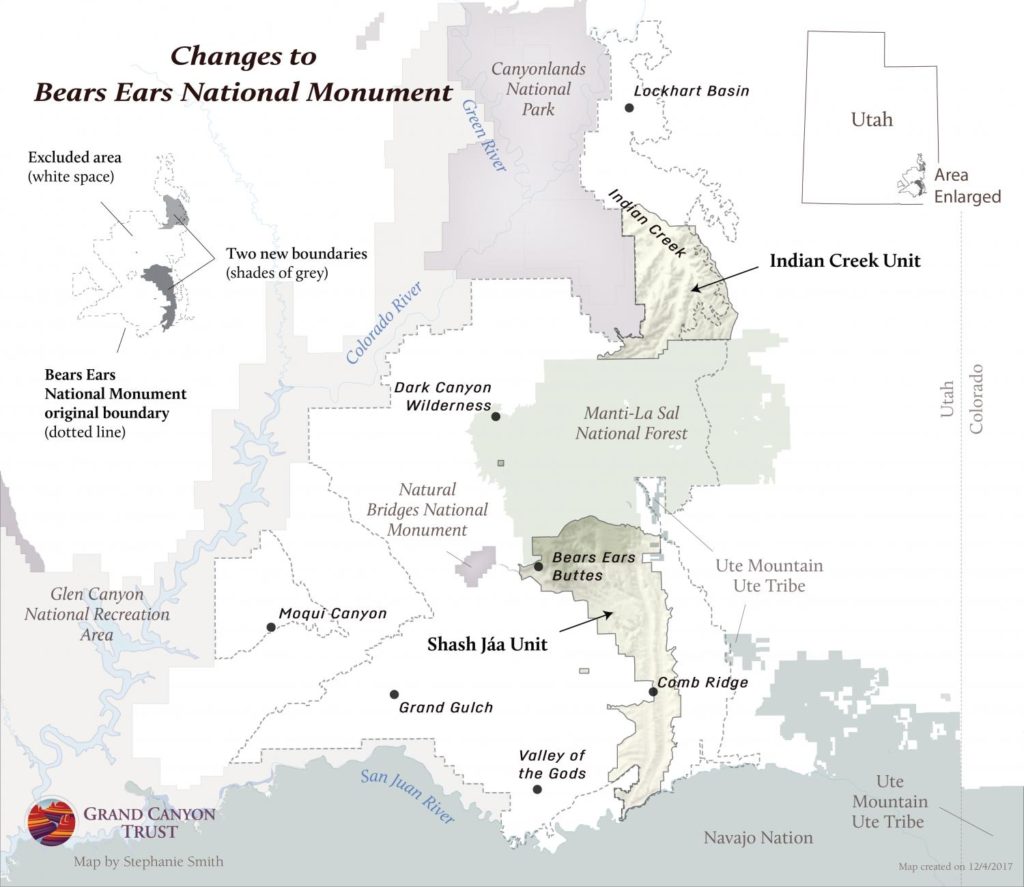 The reduction of Bears Ears National Monument to 15% of the original size has been a controversial topic in the western states since the action was proposed in the early days of the Trump presidency, and rightly so. This vast geological wonderland was given Monument protection by President Obama under the Antiquities Act to maintain the beauty and integrity of the land and many anthropologically significant sites within the monument’s boundaries. But the threats don’t stop there.  This morning a hearing was held by the House Natural Resources Committee on H.R 4532, this bill would make permanent the 85% reduction in the Bears Ears National Monument which is currently being challenged in Federal Court and would create instead create two national monuments on what remains of the original Bears Ears National Monument, to be known as Indian Creek and Shash Jaa.  But the bill doesn’t stop there.  It would also create a “collaborative” management body for the very small national monuments being carved out of  the original Bears Ears.  This management body would excludes three of the five tribes with ancestral ties to Bears Ears (Hopi, Zuni and Ute), and give significant influence over appointments to this management committee to Utah’s anti-public lands congressional delegation.  The management body, which will decide what activities will and won’t take place within these monuments, including exploiting natural resources through mining and drilling, will also contain the two San Jaun County Commissioners who were calling for the elimination of Bears Ears National Monument since it was established.   This bill is wrong on so many levels, we highlight a few of them below.

First, we can start by mentioning that this so called “collaborative” provision in the bill excludes several tries from the process and does not allow the remaining SOVEREIGN  nations of Native American tribes who have ancestral and spiritual ties to the Bears Ears land to choose their own representative, instead this bill establishes that it is  under the authority of President Trump to choose these delegates. If you’ve taken any American history classes ever in your life you will recognize the textbook “divide and conquer” tactic being implemented here…Come on folks it’s 2018 not 1800- clearly the aim of this provision is to cherry-pick tribal representation in favor of development and drown out the voices of the tribes that are spiritually connected to these ancestral lands. To further drive home this point, it is important to note that ALL 5 Sovereign Nations that were part of the founding of the Bears Ears National Monument came together as a symbol of unity to protect these ancestral lands, and ALL 5 Nations are currently suing the President for the massive reduction in size and the restructuring of this National Monument.

Next, are the claims by Republican lawmakers that the opening up these lands (the 85% which President Trump is attempting to remove from the Bears Ears National Monument, along with the new National Park lands themselves) will allow the BLM to act on the agencies “multiple use mandate” and will allegedly bring jobs and revenue into the impoverished county of San Juan where the Monument is located. Unfortunately, these are the same empty promises to the people of San Juan that have historically been made over and over again: extractive industry comes in, brings out-of-towners to work, and then leaves when they have taken all they can, with the remains of the environment and community in worse shape than it was in before.

This false promise of prosperity provides context for our final point- Recreation in America’s beautiful public wildlands can bring much cleaner and more stable revenue to the surrounding community than extractive industry. Hikers and travelers stay in hotels, shop at local stores, buy gas, buy groceries, eat at restaurants, and all around bolster the local economy. Revenue from recreation will benefit the community and the environment, not just in the short-term but for generations to come!

If you agree that HR4532 is just more bad policy at the expense of communities and the environment – PLEASE SPEAK UP. Call your congressional representatives, or send them/tag them in a tweet and urge them to oppose this bill!