We have often been conditioned to think idealistically about great historical figures as icons, institutions, or superheroes, despite the historical context of their times, but that’s a mistake. They are all people, and their lives have arcs that may involve major changes and transformations. They are a product of their upbringing but it is up to them to decide who they truly are. John Muir is no exception. Muir was raised by a racist and horribly abusive father, who relentlessly beat him, forcing him into intensive labor logging forests on their farm as a pre-teen and beating and lashing him to force memorization of one verse of the Bible after another until he could recite the entire text of the New Testament and most of the Old Testament.[i] Muir’s father viewed natural areas as places to be exploited—cut down, dug up, and put to rigorous utilitarian purpose—and saw Native Americans as an impediment to this goal.[ii]

The ignorance about people of color that was beaten into Muir was reflected in some of his earliest writings in the years before he became an environmental advocate, a time period during which he used derogatory, hurtful and racist language regarding Black and Indigenous people in some passages of his original journals written between 1867-1869.[iii]

In these same early years, Muir worked in the logging industry at sawmills in Ontario, Canada (1865), southern Florida (1867), and in 1869-1871 at a sawmill in Yosemite Valley, where he also worked for a time in the livestock ranching industry.[iv] At this time in his life, Muir commented frequently about the beautiful landscapes that he saw. However, there was also a sense of otherness in these early writings about Nature, including a preoccupation with wild places being dirty.[v] And, while Muir could note the beauty of a forest in the 1860s, he was nevertheless employed in an industry that was chopping down those same forests—evidencing a disconnectedness exhibited by many in the logging industry.

When Muir first arrived in Yosemite in 1868, it was nearly two decades after (circa 1850-1852) white miners and loggers, backed by militias and the U.S. government, warred upon the Native American tribes in Yosemite Valley. Many Native Americans were killed, with survivors being forced to either flee to other areas or settle onto reservations in the foothills as part of the government’s genocidal policies toward Indigenous peoples in order to facilitate industrial resource extraction and exploitation of the ancestral homelands of Native tribes.[vi]

After more than a year working at the Yosemite area sawmill, Muir began to change. In 1870 and 1871, he increasingly struggled with the conflict between his growing love for Nature, and the nature of his employment at the lumber mill. And, Muir began to view Native Americans, their culture, and the way they lived in harmony with Nature, with growing respect and reverence. In 1871, he began to argue increasingly with his boss at the sawmill and, in the summer of that year, Muir quit his job in the logging industry[vii] and began his personal and professional transformation. John Muir the environmental advocate was born. 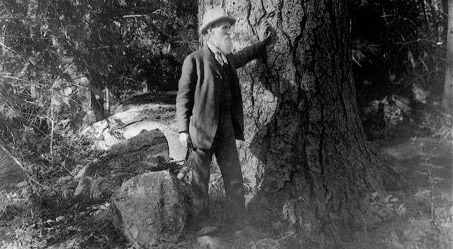 Over the following decades, and until his passing in 1914, Muir worked tirelessly to fight against the ravages of commercial exploitation of the mountains, rivers, and forests, including forests that Muir himself previously exploited. He spoke and wrote about the equality of all people, “regardless of color, or race”,[viii] wrote about the immorality of slavery,[ix] and attacked what he described as the U.S. government’s “mean, brutal policy” toward Native Americans,[x] who he wrote had been unjustly “pushed ruthlessly back into narrower and narrower limits by alien races who were cutting off their means of livelihood…”[xi] He became an active defender of Native American rights as a member of the Sequoya League.[xii] While some of Muir’s colleagues promoted white supremacist myths and exclusionary views regarding national parks and forests,[xiii] Muir spoke out about the importance of making these areas accessible and encouraging all people to experience them, writing:

“Few are altogether deaf to the preaching of pine trees. Their sermons on the mountains go to our hearts; and if people in general could be got into the woods, even for once, to hear the trees speak for themselves, all difficulties in the way of forest preservation would vanish.”[xiv]

Muir traveled to Alaska numerous times to learn about the landscape and Indigenous peoples. He formed strong relationships with Native Americans, calling them his brothers, and lived with Alaskan tribes for extended periods of time. In turn, two different tribes bestowed on Muir the honorary chief titles of “great Ice Chief” and “adopted chief”.[xv] Muir wrote about Native American traditional ecological knowledge and craftsmanship with great respect, observing: “With the same tools not one in a thousand of our skilled mechanics could do as good work”,[xvi] and he conveyed deep admiration for Native American culture:

“I greatly enjoyed the Indians’ campfire talk this evening on their ancient customs, how they were taught by their parents ere the whites came among them, their religion, ideas connected with the next world, the stars, plants, the behavior and language of animals under different circumstance, manner of getting a living, etc.”[xvii]

Thereafter, Muir wrote repeatedly about the intelligence and dignity of Native Americans and honored how traditional Indigenous peoples lived in peaceful coexistence with Nature and wild creatures, expressing his view that Native peoples “rank above” white settlers, who he increasingly described as selfish, base, and lacking honor.[xviii] This would become a constant theme in Muir’s writings, as he attacked the dominant white culture’s destructive and greedy ways, and its anthrosupremacist mindset that placed humans above all else and recognized no intrinsic value in ecosystems or wildlife species beyond whatever profit could be gained by exploiting them:

“These temple destroyers, devotees of ravaging commercialism, seem to have a perfect contempt for Nature, and, instead of lifting their eyes to the God of the mountains, lift them to the Almighty Dollar.”[xix]

This is the John Muir who is worthy of honor and respect—the Muir who evolved beyond his upbringing and worked to protect Nature while simultaneously promoting admiration for Native American culture and speaking against racist government policies toward Indigenous peoples in the United States. John Muir is not the only historical figure to have such an arc regarding the development of his character. Many of our most beloved historical figures, including those who fought for civil rights and women’s equality had arcs to their lives too—troubling views or actions at one point in their lives or careers that were later transcended by moral growth.

As we join together to create a more inclusive and just environmental movement,[xx] and to bring about needed societal transformations to increase environmental protections, racial equality and social justice, defining people by the trajectory of their lives, rather than by the worst or lowest versions of themselves across the history of their experience, is going to be important. Why? Because we are going to need people to evolve, to become better, if we are going to succeed. John Muir’s evolution as a person can serve as an example of this.